Transition from Worlds Chat to WorldsPlayer

In 1998, Worlds Chat changed client to Java-based WorldsPlayer and added more features. Like its predecessor, it was released as a CD-ROM during its early days, but soon enough it was only available for digital download.

Though you can no longer purchase VIP, at the time this was one of Worlds Inc.'s attempts at financing WorldsPlayer's development. VIP allowed access to customizable avatars, Articulated (3D) avatars, and special VIP rooms in certain worlds.

The introduction of having "bookmarks" aka WorldsMarks for worlds. It was also the release of the "Drive" button -- an alternative to using the directional keys for traveling through virtual space.

You can view Worlds scenes from six different perspectives or camera positions: First person view, Low first person, Waist, Shoulder, Head, Overhead, and Behind. You can also look up and down. The speed at which the camera turns as you move, can also be set by you to slow, medium or fast. WorldsPlayer saves your avatar view settings from session to session.

Around early 1999, users like Penumbraxx, JetJanitor, and many more discovered the way to customize avatars by altering the VIP avatar line in the worlds.ini file located in the WorldsPlayer install location. Some users at the time did not understand the process, and understood it to be outside of the regular user interface. For that reason, you can find some messages on forums and personal sites that considered the concept of custom avatars being a sort of "hacking" of WorldsPlayer, though it was not technically a hack. Even during the time of Worlds Chat in 1994-1997, Worlds Inc. never discouraged users' creativity in customizing avatars.

Rather than having only different parts of the same space station in the teleport map, this new map had whole new worlds to explore, as well as the promise for more to be discovered. 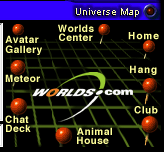 Challenges During This Period

By many accounts, Worlds Inc. and its subsidiary projects suffered the "dot-com crash" a bit earlier than other technology companies.

For example, in an effort to focus attention and resources on the Gamma project (known as WorldsPlayer today), Worlds Inc. fired the folks involved in the Active Worlds project at the beginning of 1997. Several of those creators decided to acquire the project under a new company named Circle of Fire Studios and continued growing Active Worlds completely separate from Worlds Inc. At this point, this article continues to focus on the development of WorldsPlayer, but more information about ActiveWorlds history can be found in the ActiveWorlds wiki and in Mauz's history.

Due to increasing funding shortfalls, Worlds Inc. also fired all full-time employees June 2001 but kept the platform online. Some of the employees remained as volunteers.

Community content is available under CC-BY-SA unless otherwise noted.
Advertisement